We often hear tales of “How the West was won”, but my August book club pick is going to reverse that motto and tell you “How the East was won” (by a group of women from the West.) I’m talking about the suffrage movement and extending the right of voting to women in the United States. 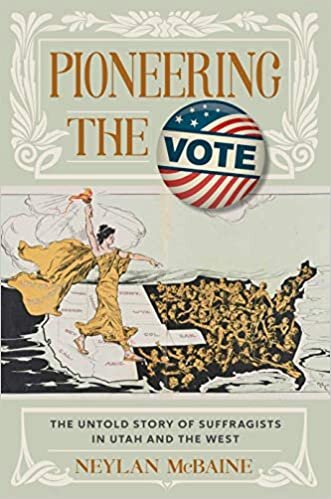 Pioneering The Vote, the untold story of suffragists in Utah and the West, by Neylan McBain, is a little piece of history, timely revisited, as the 19th Amendment, passed by Congress June 4, 1919, was ratified on August 18, 1920 - 100 years ago this very month!

Guaranteeing women the right to vote was not an idea easily embraced, nor granted without much resistance, controversy, and derision. It took decades - nearly a century in fact - of work before the 1920 victory.

“Pioneering the Votetells the remarkable, largely unknown story of the early suffrage victories that happened in states and territories in the American West, when the East was still decades away from the 19th Amendment. With the encouragement of the Eastern leaders, women from Utah, Colorado, Wyoming, and Idaho came together in a unique moment of friendship and unified purpose to secure the vote for women in America.”

Visit with Emmeline B. Wells, and friends Susan B. Anthony and Reverend Anna Howard Shaw at their gathering of more than 8,000 people from around the nation at the Rocky Mountain Suffrage Convention by picking up your copy of Pioneering The Vote - great for gift giving too!